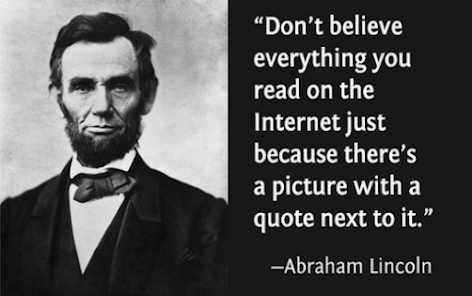 Check out Google's "Be Internet Awesome," a great resource for elementary teachers and families!

Fact vs. Fiction: How to Tell the Difference

(from the Media Literacy Council)
There are many examples of false content on the internet that had misled countless people. False or inaccurate information is rampant on the internet for several reasons. For one, there is a lot of internet user-generated content – such as photos, videos, blogs and social media posts – but little quality control. Users may create on purpose humorous or sensational but often untruthful content to get more views, likes and shares. This is made worse when the media use such content to get more views and sell more ads but fail to validate it because of time or resource constraints.

Then there are the rumors that get spread because they play on people’s fears and anxieties; malicious or falsified content that is created to push certain agendas; and opinions that are supported by untruths or only selected facts. To be smarter digital citizens, we need to be aware that not everything that gets posted online is true or gives us the whole story. We need to be able to discern facts from fiction, and facts from opinions.

What is it, Really?

Let’s first be clear about what is meant by “fact”, “fiction” and “opinion”. The Oxford Dictionary of English defines a fact as a thing that is known or proved to be true. Fiction refers to something that is invented or untrue. As for opinion, it is a view or judgment formed about something, though not necessarily based on fact or knowledge. To distinguish facts, fiction and opinions, the first step is to know where such content can appear on the internet.

• Counterfeit websites At first glance, counterfeit websites may look legitimate, as if created by official, authentic sources, but they are aimed at spreading false information or furthering malicious views and biased opinions. One example of a counterfeit website is www.martinlutherking.org. In truth, it is a racist and biased site run by a white supremacist group in the United States, disseminating hateful views about Martin Luther King, Jr., the African–American civil rights leader, to unsuspecting students.

• Parody websites Parody sites make fun of what happens in the real world. The Onion and The Daily Mash, for example, are parody news sites. Run by legitimate media companies, these sites may mimic real news media but offer humorous satirical news for entertainment. Although satire is most of the time quite obvious, people not in the know– even other news organizations– may mistake some of such news to be real.

• Product websites Some sites selling products or services may look like they are providing good, useful information on topics such as disease, health and well-being, but in reality they may be selective about the facts, omitting that which is contradictory and may affect sales. Others may not be upfront – they may try to exploit your anxieties and insecurities and convince you of the evidence before revealing that they are selling products or services, such as medicines and health treatment programs that purport to solve your problems.

• Photos and videos, posts and statuses Fake content in photos and videos can be staged, or created using image-editing or visual effects software, while false information and myths on anything, from Facebook privacy to cancer cures, can be easily created or spread as posts and statuses.The creators intend these as hoaxes or sensationalism or to mislead and further their agendas. They can often be found circulating in social media as they are shocking, sensationalized or capitalize on people’s fears; sometimes mainstream media may mistakenly pick them up too. Telling fake from real can sometimes be hard unless you subject the content to close analysis and cross-checking.

• Wiki sites Sites run on wiki, a type of web application that allows people to collaborate on content, can be changed by anyone. One example is Wikipedia, the free Internet encyclopedia. Wiki’s open nature means that wiki content can be vandalized or altered unnoticed; its reliability cannot be taken at face value.

• News and opinions Take any piece of writing – be it from a newspaper or a blog – and you may find that it contains both facts and opinions. News stories, though meant to be neutral, often also contain opinions, such as in the quotes of interviewees and commentators. On the other hand, essays, reviews, and marketing copy are meant to be persuasive and sell a point of view; their writers may choose to reflect only facts that support their opinions. Unethical writers may even resort to lies or half-truths.

Ask yourself the following questions and you can better differentiate between facts, fiction and opinions, and assess if the content is factual and trustworthy:

• What am I seeing? Firstly, be aware of what you are reading or seeing. Is it a news story, opinion piece, review, satire, marketing copy, gossip, a wiki entry or a chain status update? Within the piece of writing, which are the facts and which are the opinions?

• Who is the source? Who produced or provided the information? Knowing who the source or the writer is gives you an inkling of how much you can trust the content. For example, if an article comes from a credible online newspaper, you may choose to believe it more than one that originates from a tabloid. Knowing the source also gives you an idea of their background, motivation and agenda. You can look up website owners on whois.net or checkdomain.com. If you cannot ascertain the source or if it is anonymous, you should exercise extra care in determining the veracity of the information.

• What does the language tell me? Language often reveals clues to the writer’s motivation. For example, loaded or highly charged words may hint that the writer is overly biased or is pushing a specific agenda. Language also helps you sort out thefacts from the opinions. Words and phrases such as “show”, “confirm” and “according to” point to facts and evidence; others such as “claim”, “argue”, “it is believed” and “in his view” indicate opinions.

• Where is the proof? Have verified facts been provided as evidence? Does the argument make sense and logically lead to the conclusion? Based on what you already know, what information do you think has been left out or skewed so as to support the opinions expressed? Have both sides of the story been told?

• Am I being biased? Be mindful of how your personal bias can affect how you view and assess information. Human beings are prone to cognitive biases such as selective perception, which occurs when our expectations or beliefs affect our perceptions. Many were duped by the fake pictures circulated during Hurricane Sandy, arguably because the devastation caused by the storm was expected to be widespread and severe. Another type of bias is confirmation bias, which happens when we favor information that supports what we believe or want to be true, rejecting information that is contradictory. For example, if you hold the view that genetically modified (GM) food is unsafe, then you may consciously seek out or notice corroborating facts and opinion online, which further validates your pre-existing belief, while viewing opposing information as unreliable.

• Can I check if it is real? A cross-check on search engines and social media often helps you know if what you are viewing or reading is real. There are also some sites that verify or catalogue urban legends, myths, hoaxes and scams, such as Snopes.com. One rule of thumb is to always cross-check important information across multiple news sites.

A Grain of Salt

It is a fact of our digital life that there is much false information circulating online. Unless you are certain that it has come from an authoritative source or you know for a fact that it is true and reliable, it is probably a good idea to take Internet content with a grain of salt. However, with the help of a critical eye, an open mind and the above practical tips, you can better evaluate the veracity of the content and become a more informed digital citizen.