DiAne Morin, head secretary at Roy Jr. High, has been named Weber School District's Classified Employee of the year for 2015-2015. DiAne was nominated by Kirt Swalberg, Principal of Roy Junior High. DiAne, who is the Head Secretary at Roy Junior High, states that she was humbled by her nomination and for the opportunity she has been given to work with "amazing" administration, staff, and most importantly, students. DiAne's career with the district has spanned 26 years.

Mr. Swalberg says that no one embodies the spirit of the Weber School District and Roy Junior high better than DiAne. Always positive and enthusiastic, she is the first contact people have when entering the school. Regardless of whether you are a student, community member, or parent, everyone is greeted by DiAne with a friendly face and a helpful demeanor. Mr. Swalberg states that DiAne makes everyone she comes in contact with feel special and as if they matter. He states, "I have never seen her get angry or impatient with anyone. That is not to say that she does not have hard conversations with people. She is just able to show respect and listens to what people have to say. It is for this reason I can say that everyone who comes in contact with DiAne loves her."

DiAne feels that her most important responsibility as Head Secretary is to set the tone for everyone to have a positive experience at Roy Junior. She believes that it is critical that everyone in her school feels valued and important. Junior high can be a very difficult stage developmentally for adolescents. For this reason, it is important to DiAne that she is able to be a positive source of support and to provide a "safe haven" for students who may be struggling. She states, "I hope I can be an example, an encourager, or even give a little extra strength they may need."

As an example of her dedication to the students of Roy Junior High, DiAne has voluntarily assumed the role of being an advisor to their student government. She took on this responsibility solely because she loves the students and wants to make a difference. More than just a job, DiAne is truly invested in giving back to the students in every aspect of her duties at Roy Junior High. Mr. Swalberg says that "DiAne is a vibrant, determined employee and a delightful person. Her positivity is contagious and her energy unmatched." He reports that he is a "better person" for having known her.

DiAne has a motto that she lives by. It is: "I HAVE ONE SHOT! ... One shot to be the best I can be, to touch a heart or make a difference in some small way."

We are honored to recognize DiAne for her efforts and dedication. She has definitely made a difference; not in a small way, but in a big way. We thank DiAne for being representative of the qualities and traits that we believe make our district great. Congratulations on this much deserved honor.

Weber School District wishes to congratulate Mrs. Becky Sagers of Fremont High School on being chosen to receive the 2014-2015 Teacher of the Year award. Nominated by Dr. Rod Belnap, Principal at Fremont High School, Mrs. Sagers was chosen from a pool of 10 nominees.

Dr. Belnap states that Beck "exemplifies so much of what a teacher should be as a role model, a professional, and someone who inspires kids each day." Becky has a passion for education and fosters a culture of leadership and self-sufficiency in her classroom. It is her belief that students should be given leadership opportunities which contribute to cooperative learning, communication and interpersonal skills that will make them better equipped to handle challenges in their academic endeavors and eventual career challenges. She stated, "I believe that students are amazing, capable, and willing to learn and grow in an environment where they feel safe in the expression of their thoughts and feelings." It is clear that her students value the relationships that they have developed with her in the classroom. Dr. Belnap said that it is not uncommon to run into her former students who invariably ask him to "tell Mrs. Sagers 'hi' for me!"

Professionally, Becky is organized, prepared, and uses her time well. She utilizes multiple instructional methods, technology, and pacing to engage students in an effort to enhance their learning experience. It is important to Becky that her students are prepared to take on adult roles, becoming responsible and contributing members of their communities and in their own families. She does not take her duties as an educator lightly. As Dr. Belnap stated, "I've heard it said that Teaching is a Science... that said, Becky's evolution to mastering her craft is something all young teachers can emulate."

The fact that Becky is a fantastic cook and has one of the "best smelling/best tasting" classrooms in the school as a Foods teacher certainly helps make her popular with the students; however, it is her dedication to the students that makes her a particular favorite. She is as invested and enthusiastic about the struggling students as she is with the best of her students. The kids recognize her efforts at creating a fun and engaging classroom while they learn real-life skills. She stated, "I believe as a teacher it is imperative that I teach my students to believe in themselves and help them recognize that they are capable of being successful in the classroom and throughout their education experience."

Congratulations to Mrs. Sagers on receiving this well-deserved award. She is a wonderful representative of the excellent caliber of educators we have in the Weber School District. 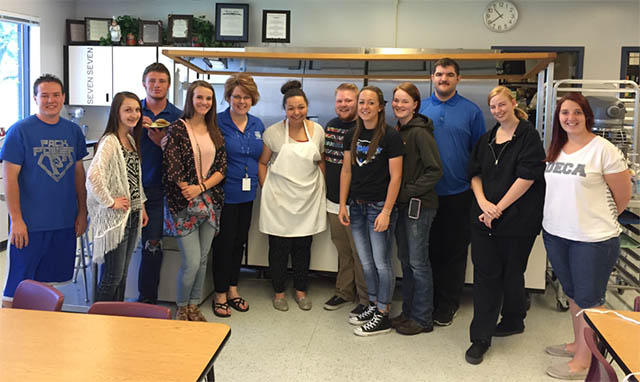