Friday, March 18, 2016 was a big day for the National Academic League team at TH Bell Junior High School.  Months of preparation and countless hours of practice paid off when the Minutemen advanced to the national championship after defeating Roland Park Middle School of Baltimore, Maryland.  TH Bell faced off against Hanes Magnet School of Winston-Salem, North Carolina, the current defending national champions.

The National Academic League was founded to encourage academic competition in a tournament setting.  Essentially, it is a "battle of the brains" between opposing schools.  As per the description on the NAL website, "A team of 15 to 40 students under the direction of a coach play a four-quarter game focusing on questions that span 22 subjects grouped under the basic curriculum areas of math, English/language arts, science and social studies. Each question has been correlated to National Curriculum Standards. Players use strategies to keep possession of a question sequence, learn teamwork as they huddle to answer a complex question, learn to problem-solve by preparing and presenting a solution to real-world problems, and engage in a fast-paced, quick-answer contest."

This was the Minutemen's first time playing in the national championship.  The tournament was played via live video feed at Weber Innovation Center.  The four-quarter game consists of a roundabout video segment where players buzz in to answer trivia styled questions, a teamwork video where teams huddle to answer timed questions together, a problem solving video where players take on a "real life" problem and collectively present their proposed solution, and finally, a one-on-one video that is a speed contest sometimes culminating in a free-for-all.  National champions are ironically awarded with the TH Bell Award.  The National Academic League was founded by TH Bell's namesake, Dr. Terrel H. Bell along with Dr. Donna L Elmquist.  A Utah native, Dr. Bell served as the U.S. education leader under three presidents.  The NAL was launched in Salt Lake City's Granite School District in 1991.

TH Bell proved to be a worthy opponent to the defending champions at Hanes Magnet School; however, Hanes ultimately went on to defeat the Minutemen in Friday's match.  Weber School District Superintendent Dr. Jeff Stephens, who attended Friday's match, commended the team and reminded them that their accomplishment as national first runner up is not diminished by Friday's loss.  He praised their hard work and dedication, and conveyed the pride the District felt at their achievement.  We have a feeling that this will not be the last we hear of TH Bell's NAL team! 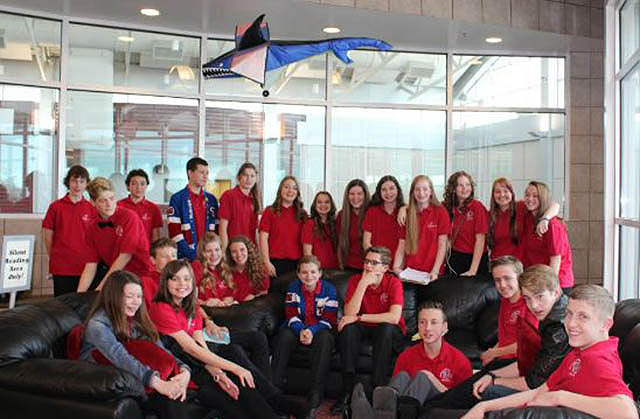