It's not every day that an astronaut comes to your school to speak but that's exactly what happened for students at H. Guy Child Elementary thanks to ATK and volunteer Shannon Sebahar who helped coordinate the event.

Kent Rominger, NASA Astronaut and former Navy fighter pilot, came to H. Guy Child to talk with students about the life of an astronaut. Rominger, who has been to space no less than five times, told students about the importance of hard work, math and science, and teamwork while showing them pictures and videos of his time working on the International Space Station.

Students had the opportunity to ask questions at the end of the assembly and they were very interested in what everyday life was like in space. Rominger answered questions about black holes, astronaut ice cream, floating in space, where he went in space, and how time in space works. He also told students about NASA's current project, a new rocket that will be going to Mars. Whispers were heard and energy was felt as he told students, "You all are the perfect age to go on this rocket and go to Mars. "Several students raised their hands and told Rominger they wanted to "...be an astronaut just like him."

Rominger came to the school as part of World Space Week. World Space Week is the largest public space event on Earth. According to the World Space Week website, "More than 1,400 events in 80 countries celebrated the benefits of space and excitement of space [last year]." Other activities H. Guy Child participated in included having students trying to pick things up wearing large gloves to simulate how hard it is to do things in space, Alka-Seltzer rocket launches, and of course, eating astronaut ice cream. Students also signed a banner along with ATK employees that will be sent to the Kennedy Space Center in support of the Orion test launch taking place in December. The launch of the Orion capsule is part of the next generation of space travel and will enable people to travel to places such as asteroids outside of our atmosphere and even Mars, as Rominger talked about.

If you would like more information on World Space Week please visit http://www.worldspaceweek.org/ 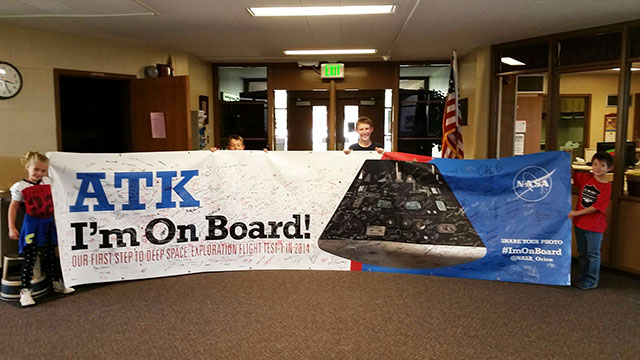 More in this category: « Weber School Board Recognizes Student and Volunteer for Accomplishments School Holiday Charity Projects Help Those in Need »